Chances are if you’re reading this page someone probably told you about a business opportunity called Organo Gold, and you are considering becoming a licensed distributor of that company.

Now, before you sign your autograph on the distributor contract, as any responsible and smart entrepreneur… it is a GREAT idea to take a close, unbiased (I am not personally affiliated with the company in any way) look at Organo Gold, its product offerings, its compensation plan and…

Remember: as easy as it is to become a distributor for Organo Gold, it is a real business.

The sad truth, however, is that an OVERWHELMING majority of the Organo Gold distributor force do not make any money because they do not treat their business like a real business, and they do not know how to properly promote the business.

There is most definitely high earning potential in the Organo Gold business opportunity, and you may as well become the next top income earner within this company if you learn the right way to promote the business, roll up the sleeves and get busy.

Take John Sachtouras as an example.

John Sachtouras was a new immigrant to the United States years ago when he started building his first network marketing company. After going through 11 different companies and various degrees of failure and small victories, John joined Organo Gold and after 2 1/2 years… he and his wife Blanca reached the Crown Ambassador rank within the Organo Gold compensation structure.

Their overwhelming success is obviously an exception – but not unattainable.

The Small Business Administration (SBA) stated that 95% of all businesses close their doors within the first 5 years of operation for various reasons, and the reality is that this stat is WAY worse in our industry of home based business (network marketing / MLM / direct sales)…

If you are eager to know and LEARN what the “secret” is that differentiates winners from stragglers, you are on the right track. This the very thing that puts YOU in the top 2% of the industry while the other 98% continue to spin the wheel at a standstill.

Before we get into that, let’s take a closer look at the Organo Gold opportunity first.

Organo Gold, Inc. was founded in 2008 by Mr. Bernardo (Bernie) Chua with the mission to bring the claimed health benefits of Ganoderma mushrooms (believed to be the most alkaline food in the world) to the masses by mixing them with common beverages such as cofee, tea, hot chocolate, etc.

The company currently operates in 29 countries as shown on the company’s official website, www.OrganoGold.com.

The annual sales volume of the company’s short 5 year history has been very impressive as you can see in the graph below (source: BusinessForHome.org) 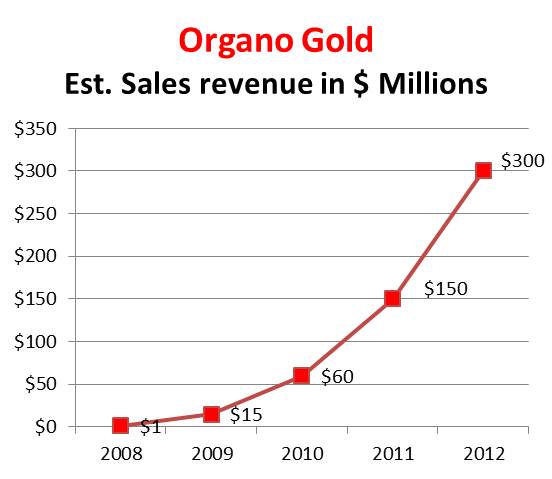 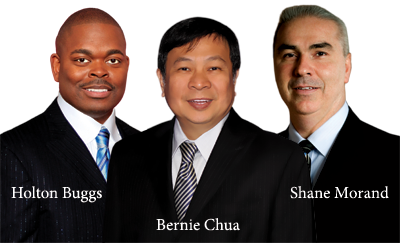 Bernardo (Bernie) Chua, Founder, CEO
Bernie Chua, a legendary networker from the Philippines, has built several extensive direct sales teams and won multiple awards in his direct sales career as a field leader. He founded Organo Gold with a strategic alliance with a Chinese producer (located in China) of organic Ganoderma products.

Shane Morand, Global Master Distributor and Co-Founder
Shane Morand has been involved in healthy coffee direct sales since 2004. He has worked directly with some of the most high profile personal development trainers such as Anthony Robbins, ZigZiglar, Brian Tracy, Les Brown, Jim Rohn, to name a few. Shane has also served as the Vice President of the Dawn Breakers Toastmaster Club.

Holton Buggs, Vice President, Sales
Mr. Buggs began his 20 years in direct sales with Amway and has developed systems for organizing direct sales teams. Mr. Buggs specializes in leadership development. Prior to becoming the vice president of sales at Organo Gold, Mr. Buggs was the top field distributor at Organo Gold, having earned as much as $900,000 in a single month.

The Organo Gold compensation plan offers active distributors 7 different ways to earn bonuses, and they are –

As of this writing, an income disclosure statement (IDS) is not readily available by Organo Gold. You can access a copy of the its compensation plan here.

Organo Gold review: What To Do NEXT?

As you can see, Organo Gold seems to be a very reliable business… and in fact, I believe it is possibly one of the best in the healthy coffee direct sales niche.

Organo Gold is no different.

” You only need to sponsor 2 (or 3, or 6 or whatever that small number is), and those people will sponsor 2 (again, repeat that small number) and the pattern repeats… and voila! The power of duplication and compound interest will work in your favor! And you will soon be financially free!”

Yes, compound growth IS indeed a fascinating concept and it does work, but it rarely works out like how it is presented from stage… and that is because we are dealing with human beings, and human beings are complicated animals 😉

The reality is that for duplication to actually kick in in a big way, you need to sponsor around 100 people in the life of your career with a company to see significant results, say, an additional $100,000 or more per year.

Out of the 100 people you sponsor, anywhere from 5-15 people will actually sponsor additional distributors or customers and the rest of them are most likely just consumers who use the products occasionally but have no motivation to actually share the products or the opportunity.

I’ve learned this the hard way myself in my first network marketing company where I sponsored around 30 people personally which grew to a team of roughly 120 people that yielded a decent business that produced, in average, $2,500 a month.  It was NOT the 6 people my upline mentors had suggested. It was 30 people.

And then I learned the art and science of marketing on the Internet via blogging, and it changed everything.

Today my business (not Organo Gold) brings in as much as $24,700 in monthly income while I work no more than 20 hours per week in my business.

There is a simple, 5-Step proven formula that my business partner Rob and I have used to create EIGHT different 6-figure and multiple 6-figure businesses online since 1997. In my first network marketing business, I used this formula to generate over 2,000 paying customers who were responsible for $460,000 in sales… all on autopilot.

I would like to share that formula with you so you can bring in more traffic, leads (i.e. real people) , sales and a exploding team in your Organo Gold business.