You are here: Home / Network Marketing Training / ‘Getting REAL With Mike Dillard’ – The Interview

Getting REAL With Mike Dillard

What’s going on, my friend? 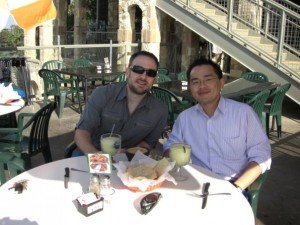 I had a crazy week last week, but I’ll leave the stories to another day because there’s something that I’d rather have you focus on right now.

If you look to the photo on the left… do you recognize those 2 guys (you should at least recognize the dude on the RIGHT!).

Well, in case you don’t recognize his face… the guy on the left is Mike Dillard, author the best darn manual ever written about the network marketing industry called Magnetic Sponsoring (still the best until I finish mine ).

He literally went from waiting tables to 8-figures a year in just 4 short years.

The other day I flew to Austin to hang out with Mike and also recorded a 77 minute, revealing, 1-on-1 interview… something that’s he’s rarely done for anyone (more like *never*).

Long story short, you are in luck … All you need to access 77 minutes of this exclusive interview with Mike Dillard is… scroll down to the lower half of this post to view the 3 part series!

According to Mike, he felt the two biggest things you’ll take away from it, are…

1: What I’d do if I had to start all over again from scratch.
2: The 3-steps that have allowed me to go from waiting tables, to building an 8-figure business, while most of the competition failed or quit.

His story, how he reinvented himself is, in my opinion, probably the biggest takeaway.
Watch the interview and judge for yourself… and whatever you decide, your path to success is about to get a whole lot shorter!

Remember to leave a reply at the comment box below the video 😎 ….