is apparently all over the news…

If you don’t know what I’m taking about just yet, watch the video below. It is the original full-length interview PRISM / NSA whistleblower Edward Snowden did with The Guardian of UK while in Hong Kong.

This is the stuff spy films and conspiracy theory movies are made of, but more importantly what is the real-world impact of his message… and what we do with that message.

The main complaint Edward Snowden had was about the abusive and excessive invasion of privacy of the PRISM Surveillance Program of the NSA (National Security Agency).

Granted the NSA and the PRISM were created specifically to monitor communication between individuals in the name of national security.

Nothing wrong with protecting the citizens of our nation… but what Snowden talked about in the video is the abuse and excessive amount of surveillance data that he thought grossly violates the privacy of a citizen.

Here is a screenshot of Facebook co-founder, Mark Zuckerberg’s response to this report – 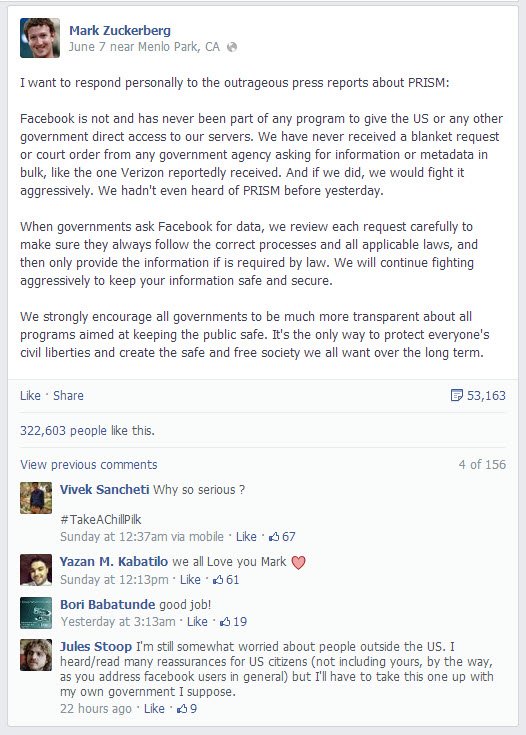 Lessons From The PRISM / NSA Whistleblower

I have no intention to turn this post into a political debate. This is not the place nor is it my personal interest.

I feel compelled to preface the rest of the post with the fact that I don’t begrudge anyone the right to have freedom of speech and opinions on matters in regards to privacy, safety of the citizens and the security of our nation. This post isn’t another hit piece about conspiracy theory or how the president and the government are awful or controlled by corporate lobbyists.

The news about the IRS Congressional Hearings and NSA / PRISM Whistleblower certainly increase our awareness of what MIGHT BE happening out there, and whether the right amount of our tax dollars are used at the right places, if at all.

In light of these events, I feel there are a few lessons to be learned here…

Lesson #1 “Without Economic Freedom There Is No Freedom.”

Any time you see a nation rises in power globally, its economy and commerce are thriving.

I still believe that we live in one of the best countries in the world, if we take a hard, serious look at what is happening around the globe.

I still believe in the American Dream.

What I do wonder about is how much of the people’s perception of the American Dream, and their willingness and desire to work for their American Dream have slowly gone by the wayside.

The government is an entity designed to serve and protect the people… so that the people can feel safe and focus on minding their own business which builds a nation’s economic foundation.

Whatever the case is… it is still of critical importance that we as individual citizens of the United States, take care of our PERSONAL ECONOMY first.

Edward Snowden actually mentioned that he was getting paid a ton of money, living in Hawaii (commonly considered a paradise), doing relatively light amount of work (controversial, no less)… before he decided to make that fateful move to become a whistleblower.

Without getting into a debate of whether what you and I agree with Mr. Snowden’s perspective or actions… I believe that it was because that he had obtained and enjoyed his perceived economic freedom (high salary) that he experienced some “true” freedom tentatively… which led to him to decide to  reveal what he believes to be injustice to the American people.

Economic freedom doesn’t mean making an obscene amount of money. It just means our basic needs are taken care of in the foreseeable future so that we can “think straight” without subconsciously favoring things, ideas or scenarios that give ourselves personal financial gain but at someone else’s or even the society’s expenses.

Lesson #2 Free Enterprise is essential to our own well-being

When I did some keyword research on “is the government going to take care of me,” here’s what Google’s Keyword Tool told me 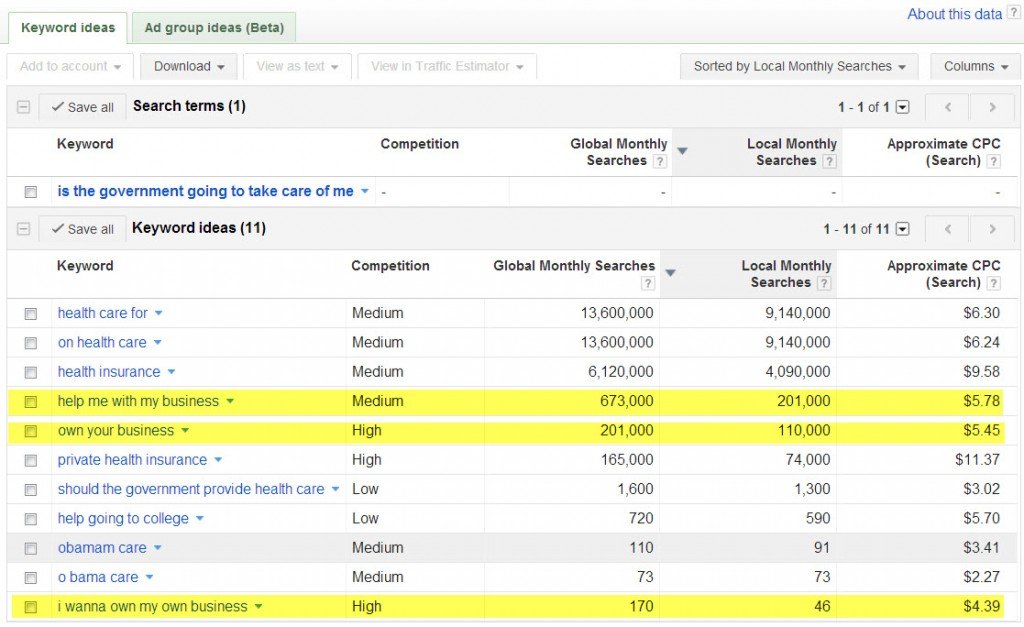 As shallow as it may sound, this is all about MONEY.

We’ve all heard the saying that “money isn’t everything but it ranks up there with oxygen.”

And as you can see from the screenshot above, there are only two topics related to this search –

2) Starting and owning a business

We already know that any governmental policy can be influenced but not directly controlled by an individual citizen… which leads us to No. 2… starting and owning a business.

The United States is still one of the, if not THE, most free country in the world when it comes to starting a business.

Many traditional jobs have seen their demand gone down, and some have disappeared entirely and will probably never come back.

So what do people who used to have these jobs do?

Sure they can possibly claim unemployment benefits… but for how long?

And yes they can go back to school to get another degree to start a new career, but again, how much does that degree cost… and even if they can afford it, and it takes 2 – 7 years to earn that degree which is not a feasible idea for most people I know.

So our last and best choice is really to start our own business.

There are many businesses today that require very little capital yet offer extreme profitable upside potential.

Most of these businesses are in the home business arena… business opportunities that you can start from home, and some only require you to have a working laptop computer, an Internet connection and under $100 of start-up capital to get the ball rolling.

One of the programs I promote in my business costs only $25 to start and offers a very profitable compensation plan.

The income from that program went from

and people who work with us that take massive action are having great results as well.

You should always reference each program’s Income Disclosure Statement.

The results I just shared are NOT typical… but you know what? YOU are not “typical,” either 😉

Anyhow, I’d like to hear your thoughts about this post, the PRISM / NSA Whistleblower and what you’re doing to take care of your own finances and privacy.

Leave your comment below, and I look forward to having a conversation with you!

Oh, and here’s just something fun for you…