Two months ago I met Jairek Robbins at the No Excuses Summit. 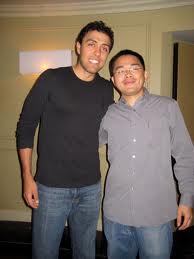 I actually didn’t get to hear his talk at the event… (sorry Jairek).

However, EVERYONE I talked to at the event was buzzing about Jairek’s talk on establishing the proper mindset for success, so I took an interest in getting to know him.

2 months later, we recorded this interview!

I found out that he’s a renowned peak performance coach, grew up in the industry and has been coaching and speaking since he was 18!

In this interview Jairek shares a few tips to help us get the most out of ourselves to create meaningful results.

As well, he answers three burning questions I had collected from leaders in the Internet/Network Marketing industry…

P.S. To find out more about Jairek and what he’s up to… visit http://www.JairekRobbins.com